Salt is arguably one of the most important cooking ingredients and one of the hottest debated topics in the nutrition community. Over the years, salt has been blamed for numerous health conditions, but is all salt really as dangerous as we have been led to believe? The reality is, not all salt is created equal and understanding the different types is imperative to optimizing health. With so many different varieties available it can be confusing to know which to choose and why, so let’s discuss salt, its functions, its benefits, and the different types in order to determine the best types of salt to use in your diet. 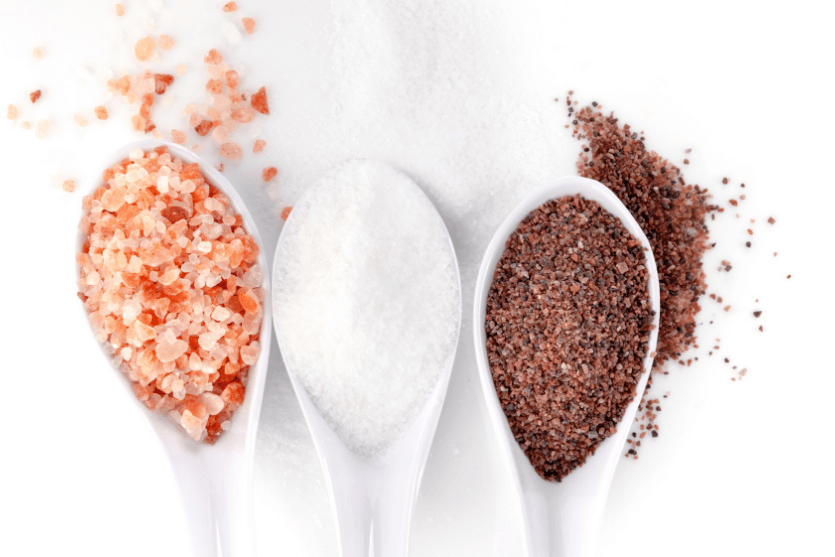 Why We Need Salt

Salt is a crystalline substance made of sodium and chloride and is one of several dozen minerals we need to survive. The human body can’t store much salt on its own so we need to consume it through our diet in order for it to carry out many vital functions in the body. Salt is important for balancing the fluid level of the blood, regulating extracellular fluid, managing the body’s acid-alkaline balance, functions of the nervous system, adrenal system, stomach acid production, and proper nutrient absorption in the intestinal tract. In fact, we are hard-wired to crave salt to ensure that we consume adequate amounts.

Part of the confusion surrounding salt lies in the lack of differentiation in the format in which it is consumed. Although salt is necessary for optimal health, even too much of a good thing can be a bad thing, and not all forms of salt are the same. The reality is, most sodium in the standard North American diet now comes from processed foods, not the salt shaker, as roughly 70% of salt is consumed through food products off the grocery store shelf. By eating a diet rich in processed food, we are no longer able to control our salt intake and the format in which we consume it. On the contrary, when consuming a diet rich in whole foods, salt is not present in the food, and it must, therefore, be added during the cooking process. In fact, it has been shown that both high and very low intakes of salt can contribute to health concerns. So, when consuming whole foods and cooking from scratch it is important to understand the best types of salt to use in order to avoid refined versions of it.

The Best Salt to Use

As the name suggests, sea salt comes from seawater, which is evaporated to make sea salt. The term sea salt is actually a broad term that incorporates various types as it can include Black, Celtic, French, or Hawaiian sea salt. Due to the different sources and production processes, sea salts are found in varying colors and textures including grey, black, fine, flaky, and coarse. For instance, fleur de sel, grey salt, and Maldon salt are the less refined result of the gradual evaporation of seawater and can take up to 5 years to make, while granular sea salt is produced by rapidly boiling ocean water in a closed vacuum. Both forms can be used in a healthy diet, although granular sea salt is best used for everyday cooking, while fleur de sel and Maldon salt provide a pleasant texture making them ideal for garnishing or finishing dishes.

Rock salt comes from salt mines from ancient lakes and seas which now lie far underground, and rock salts can come under many names. Popular forms of rock salt include Himalayan salt, pink salt, and ancient salt. The pink color of some rock salt comes from their rich iron content and some sources have been shown to include over 84 minerals and trace elements including calcium, magnesium, potassium, and copper. Rock salt can be made into many different formats including fine grain, kosher, coarse, and powder salt.

Kosher salt is a coarse grain salt made from land salt mines but is less processed than table salt. Contrary to popular belief, not all kosher salt is actually certified kosher, rather it is named after the koshering process when larger-grained versions of salt were used to remove the blood from the meat. Although most kosher salt does not contain added iodine or anti-caking agents, some brands may so it is best to read the ingredients to be sure. Given it is slightly less expensive than some sea salts, kosher salt is a great option for everyday cooking.

What About Table Salt?

Regular table salt, also known as iodized salt, is the salt that you find in processed foods and on most restaurant tables. Iodized salt came to light in the 1920s when iodine deficiency was a common health problem, however, these days you can get sufficient amounts of iodine from natural sources as long as you are eating a diverse diet of whole foods. Table salt is heat processed and stripped of its natural trace minerals, and commonly contains anti-caking agents to help prevent clumping and sugar or dextrose to help stabilize the iodine. Although neither is overly harmful, there is no value in adding them to your food when you can add natural salt by itself, so avoiding table salt as much as possible is recommended.

Salt does not deserve the bad reputation it has received, and adding natural salt to whole foods can help to make dishes more palatable while supporting health at the same time. There is no need to avoid salt entirely unless otherwise specified by a health practitioner, rather, it is best to avoid table salt and processed foods that contain refined salt. As with all food, when opting for salt be sure to read the ingredients and choose options that contain 100% salt and nothing else.