Is it bad to eat late at night?

What the research says about eating late at night.

You’ve likely heard the suggestion that you shouldn’t eat after 8:00 pm or that eating late at night causes the body to store more fat, but is there any evidence to back up these claims? While the topic is controversial in the nutrition industry, and there are pros and cons to both sides, the answer is that it depends. Here’s what you need to know about whether or not it’s bad to eat late at night. 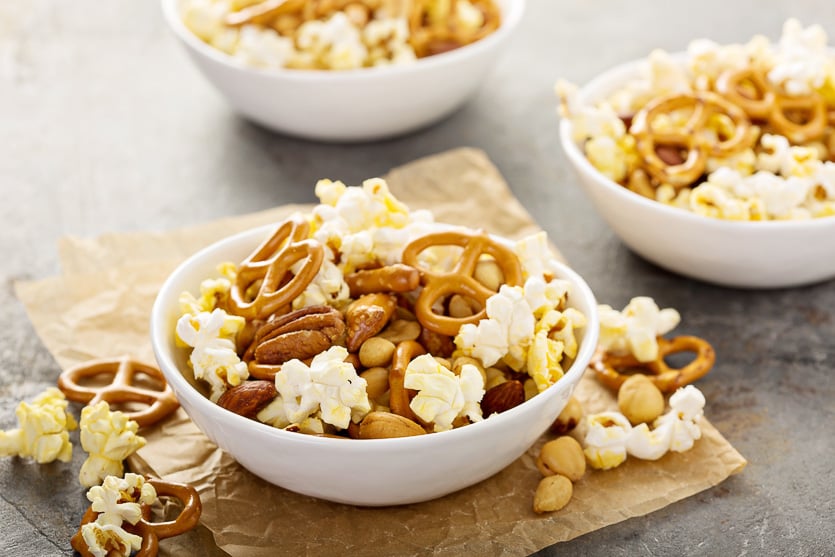 Does eating late at night cause weight gain?

A 2007 study of 12 obese women in a metabolic ward found that late-night eating did not affect weight loss. The women went through three 18-day periods in which a similar range of calories was consumed and found no significant differences in weight, body fat, or fat-free mass. (1)

A 12-week randomized clinical trial including 116 men and women was conducted comparing consistent meal timing and time-restricted eating demonstrated that, in the absence of other interventions, restricting evening eating is not more effective in weight loss than eating throughout the day. (2)

A 2020 study, shared by the American Heart Association, found that eating late at night does not impact weight gain as long you’re controlling calorie intake. In the 12-week study, overweight adults ate the same healthy, pre-prepared foods, however, half of the group consumed the bulk, around 80%, of their calories before 1 p.m. each day, versus the other half group that ate the majority of their calories, around 50%, after 5 p.m. each day. By the end of the study, the researchers found that both groups lost weight and had decreased blood pressure, regardless of when they ate. (3)

Yet, while there has been no identified definitive physiological reason why eating late at night would cause weight gain, there are still good reasons to be cautious about eating late at night. (5) The reason for this is arguably much simpler than one may think; individuals who eat late at night are more likely to consume extra calories, while individuals who limit their eating hours are more likely to consume fewer calories. A short cross-over study in healthy young adults of normal body weight found that restricting eating between the hours of 7:00 p.m. and 6:00 a.m. led to a moderate decrease in total calorie consumption, while one observational study showed that individuals who ate between 11:00 p.m. and 5:00 a.m. consumed roughly 500 more calories than individuals who limited their eating window to daytime hours. (6)(7) So while there is no physiological reason that late-night eating causes weight gain, from a behavioural perspective, individuals who eat late at night are more likely to overconsume calories, one we could have otherwise done without.

Furthermore, the types of food we tend to reach for in the evening – ice cream, chips, crackers, etc. – tend to be highly processed and hyper-palatable, which may cause us to consume more. Not only are we often eating for reasons other than true hunger – be it boredom or stress – but the mindlessness of our eating behaviours late at night may cause us to consume far more food than is needed, which contributes to additional calories, and can, therefore, contribute to weight gain in the long-run when done regularly.

Overall, there is limited evidence to support the idea that calories consumed in the evening have a greater impact than those consumed during the day and that eating late at night has a direct impact on weight gain. The current research demonstrates that it is total calorie intake, not the time you consume them, that determines whether an individual gains weight. So, while eating late at night won’t directly cause you to gain weight, it can if it causes you to eat more.

Is it bad to eat before bed?

However, while eating late at night is not impacted by your metabolic rate or vice versa, it is important to consider its impact on the body’s circadian rhythm. Your circadian rhythm, or circadian cycle, is the body’s master clock and regulates your natural sleep-wake cycle, digestion, eating habits and hormones. (12) This natural process affects most living things, including animals, plants, and microbes, and is impacted by light and darkness. A study in the British Journal of Nutrition found that eating or drinking less than 1 hour before bedtime was associated with an increased risk of waking after the onset of sleep and a significant increase in the risk of inefficient sleep. (13) Some studies have also shown that eating late at night is linked to disrupted circadian rhythms and may cause fluctuations in appetite-related hormones leptin and ghrelin, which can stimulate food intake. (14)(15)

Benefits of Eating Late at Night

It allows for flexibility.

May support recovery and muscle building.

Some food may help you sleep.

Consuming certain foods as a late-night snack or before bed may actually enhance sleep. For instance, foods packed with magnesium or melatonin may help to enhance the body’s nutrient and hormone requirements for a good night’s sleep. (17) While some people supplement with magnesium or melatonin, consuming foods rich in them may help promote falling asleep and staying asleep.

Cons of Eating Late at Night

You may be less mindful of hunger cues.

Late-night eating is often triggered by more than simply hunger cues. Whether you’re watching TV or reading a book, late-night eating is often triggered by emotions outside of physical hunger cues, which can lead to overconsumption of food and daily calorie intake. In fact, one study demonstrated that those who ate closer to bedtime tended to consume more overall calories than those who ate their last meal earlier. (18)

It may impact your food choices.

Not only does eating late at night have the potential to cause you to eat more but it also tends to lead to poorer food choices overall. From a behavioural perspective, eating late at night may lead individuals to choose unhealthy and more calorie-dense foods. One study found that individuals who eat a higher proportion of their total calories in the evening are not only more likely to consume more junk food, fatty foods, and alcohol, but they are more likely to consume more calories over the course of the day. (19)

It may exacerbate digestive issues.

For some individuals, eating late at night or before bed can exacerbate digestive issues such as heartburn and indigestion. Given that the digestive process is a top-down system, as it is supported by gravity, lying down after eating can create stress on this otherwise vertical operating system. For instance, individuals with a condition known as GERD (gastroesophageal reflux disease) often experience symptoms of heartburn when they lie down after eating, as digestive juices flow back up into the esophagus and cause irritation due to a loosening of the muscular valve between the esophagus and the stomach called the lower esophageal sphincter. (20)

It may impact your sleep.

While eating late at night may not directly impact sleep, especially if it’s a nutrient-dense choice, the time of day we eat has been shown to impact the body’s circadian rhythm or natural clock. While the research does remain mixed on this subject, it is something to consider on an individual level.

So, is it bad to eat food late at night?

It depends. When total calorie intake is controlled for, eating late at night has no direct physiological impact on weight gain. On the other, when total calorie intake is not controlled, eating late at night may cause an individual to overconsume calories, which can cause weight gain over time. Furthermore, it may be more difficult to resist hyper-palatable foods. Not only may this lead to an overconsumption of calories but some research suggests that eating before bed may negatively impact the body’s natural circadian rhythm and impact digestive issues in certain individuals.

Eating late at night is not inherently unhealthy and will not directly cause weight gain unless it causes you to eat more; it is your total daily calorie intake that determines if you will gain weight. If you’re hungry late at night, do your best to opt for nutrient-dense whole foods and eat as mindfully as possible.