Is Stevia Good for You?

Stevia is a calorie-free sweetener, but is stevia good for you?

We all know that too much sugar isn’t good for us and, for that reason, food manufacturers are always looking for sugar substitutes to market to consumers and use in their products. In recent years, stevia, a natural plant-based sweetener, has grown in popularity given it’s intensely sweet and free of calories, but what exactly is it? And is it safe? Here is everything you need to know about stevia and an answer to the question; is stevia good for you? 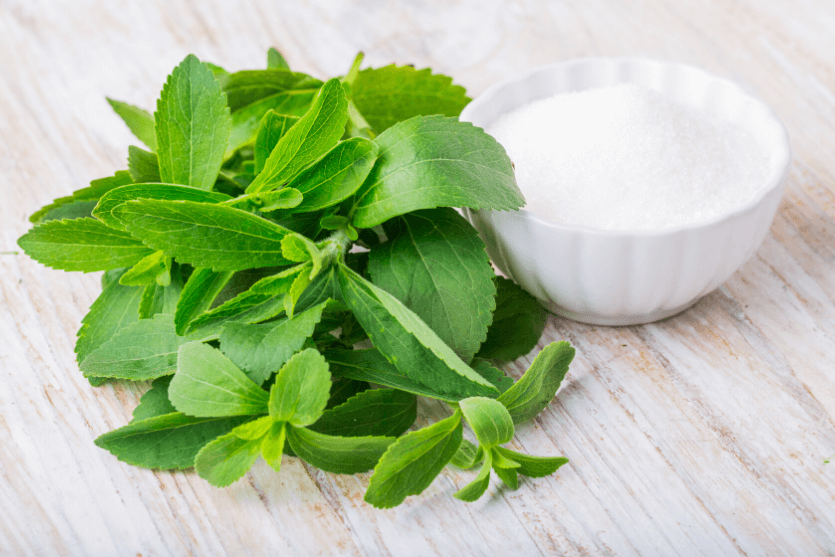 What is Stevia Made From?

Stevia, also known as Stevia rebaudiana Bertoni, is the sweetest of the stevia species of plants and is a perennial herb that is native to South America. Stevia has been historically used as a sweetening agent but has been gaining popularity in North America in recent years. The leaves of the Stevia rebaudiana plant, which can be used fresh or dried, produce compounds called steviol glycosides, including stevioside and rebaudioside A, which help to give the herb it’s sweet taste.

While the stevia leaf, in it’s fresh or dried form, is naturally sweet, the stevia found on grocery stores shelves is a more processed version of it. Today, stevia is available in two specific forms; unrefined stevia extracts, leaves and powders and purified stevia extract.

Not only is purified stevia extract available in isolated forms, but it is commonly used as an additive to sweeten sugar-free and low-calorie food products, protein powders and protein bars, and is also used in some sweetener blends which combine stevia with other alcohol sugars or artificial sweeteners such as Truvia and Stevia in the Raw.

How is Purified Stevia Extract made?

To extract the plant’s natural sweetness, stevia leaves are harvested and dried before being steeped in hot water. This water is then passed through a resin to help trap the compounds and then the resin is washed with alcohol to free the steviol glycosides. The mixture then goes through multiple stages of filtering and centrifuging to concentrate the sweetest components of the leaf, and the resulting product is a purified stevia leaf extract that is ready for commercial use.

Although stevia does provide a sweet taste and is, ounce per ounce, 200 to 400 times sweeter than sugar, stevia is not sugar itself. Sucrose, the compound form of sugar, is made from carbon, hydrogen and oxygen atoms, while stevia is made of glycoside compounds of steviol, specifically stevioside and rebaudioside A.

The natural form of stevia, the green leaf that you can grow in your backyard or pick off the plant, has been used by various cultures for centuries for medicinal and therapeutic use. As a concentrated sweetener, the majority of the evidence indicates that stevia, used in reasonable amounts, is a harmless non-caloric, natural sweetener. In low doses, stevia consumption appears to be associated with general anti-inflammatory and anti-oxidative effects, and some research indicates that stevia may be a safe and effective way to help manage blood sugar levels in people with type 2 diabetes.

There is some conflicting research which suggests there is no difference in glycemic and insulin responses between stevia and glucose, and although there may be a very small glucose reducing effect of stevia consumption, it does not appear to apply to everybody and is unreliable. Higher doses of stevia have also been linked to fertility problems in animals, although this is a somewhat contested issue. Moreover, some research suggests that zero-calorie sweeteners like stevia could interfere with concentrations of beneficial gut bacteria, which plays a central role in disease prevention, digestion, and immunity.

So, Is Stevia Good for You?

Unfortunately, there is a shortage of human studies evaluating the full spectrum of possible negative effects of stevia, however, stevia is recognized as safe by Health Canada. Purified stevia extract is regulated as a food additive and has undergone a full safety review and has been approved for use in various foods sold in Canada.

Stevia is a natural sweetener and, while it is generally considered safe, it is still a sweetener and is best used in moderation. Occasional consumption of stevia, in small amounts, likely has no impact on general health. Whenever possible, reach for the unrefined versions of it in extract, leaf and powder forms, and read the ingredients to ensure that it has not been paired with any artificial sweeteners.