What’s the difference between plant and animal protein? 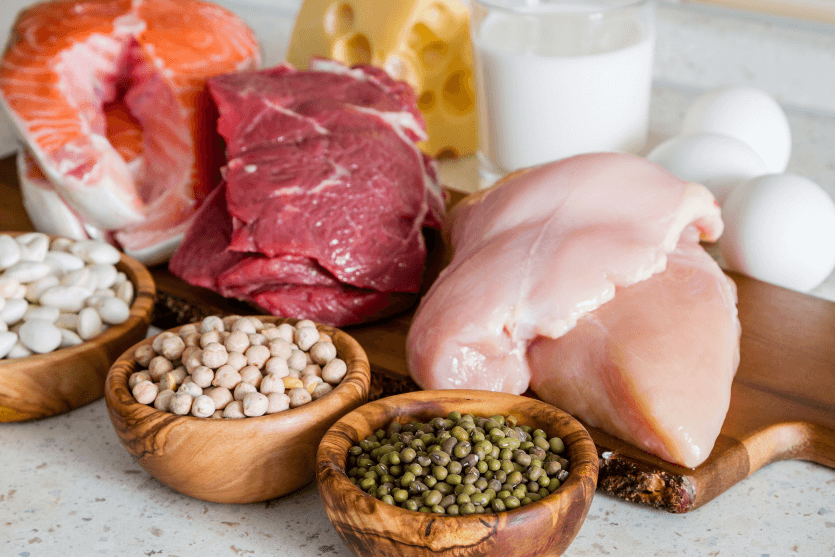 Protein is one of three essential macronutrients, along with carbohydrates and fat, that are present in food. Proteins are made up of smaller molecules called amino acids, of which there are 20 in total, which are considered the building blocks of life and are found in every cell in the body. Amino acids are joined together by chemical bonds to form chains, which play various roles in the human body including the production of enzymes, hormones and neurotransmitters; cellular structure, growth and repair; support to the immune system, and transportation of nutrients. (1)

The primary difference between plant protein and animal protein is the composition of amino acids. Amino acids can be classified into three different groups; essential, nonessential and conditionally essential amino acids. (2)

What is animal protein?

All animal meats and animal by-products, such as eggs or dairy, are considered animal proteins. Animal proteins are known as complete protein sources as they contain all nine essential amino acids. Sources of animal protein include:

What is plant protein?

While plant and animal sources of protein both contain protein, they contain different macronutrient ratios and, therefore, vary widely in protein content. Here is a comparison of a 100-gram serving of cooked chicken breast, extra-firm tofu, cooked black beans, and raw almonds. (4)(5)(6)(7)

Calories: Calorie content varies widely in plant and animal proteins depending on the source. While chicken, tofu, and black beans contain a similar calorie content per 100-gram serving, almonds contain 3.5 or more times more calories per serving given their high-fat content.

Fat: The fat content of plant and animal proteins varies widely based on the source. While soy products, beans, and lentils are generally low in fat, animal protein sources can contain both high and low levels of fat depending on the type of meat and cut of meat, while nuts and seeds are primarily composed of fat and, therefore, always high in fat content.

Pros and Cons of Plant and Animal Protein

There are important pros and cons to consider in both plant and animal protein sources.

More Expensive: Compared to plant proteins, animal protein does have a higher price point per serving; however, per gram of protein provided they may actually be more expensive.

Format Matters: Processed forms of animal protein, specifically processed forms of red meat such as hot dogs and corned beef, have been linked to adverse health effects including heart disease and cancer. (11)(12) However, the direct causation remains disputed within the scientific community and, while unprocessed red meat has shown lesser correlations, there have been no links to leaner animal protein sources such as poultry or seafood. (13)(14)

Plant Foods Linked to Health Benefits: A diet high in plant foods has been linked to numerous health benefits including lower cholesterol levels, lower risk of heart disease, and improved heart health. (15)(16) While you can consume animal proteins and still consume a diet rich in plant foods, generally speaking adding more plants to your diet is beneficial to overall health.

Less Expensive: Compared to animal proteins, plant proteins are typically cheaper. However, while 100 grams of beans, lentils or tofu generally has a lower price point than 100 grams of chicken or beef, it does contain less protein overall.

Highly Versatile: While one could argue on both sides, plant protein sources are generally considered more versatile ingredients as they can be used in both savoury and sweet dishes, from veggie scrambled to curries to dips and sauce, for breakfast, lunch, dinner and snacks.

Lower Concentrations of Protein: Gram per gram, plant proteins are less concentrated in protein than animal sources, therefore, one will need to consume more calories to reach the same protein intake as animal sources.

Contain Antinutrients: Plants contain antinutrients that impair the digestion and absorption of protein, vitamins, and minerals. This natural defence mechanism helps to protect the plant from infections or consumption by animals and insects and includes phytates, lectins, oxalates, tannins, glucosinolates, and saponins. For example, when phytic acid binds zinc, an essential mineral, it forms an unabsorbable complex that your body cannot use. (17)  While, in most cases, these antinutrients can be destroyed or denatured through proper preparation, these are things that animal proteins do not contain.

Missing Essential Nutrients: Certain essential micronutrients are simply not found in the plant kingdom. There are no reliable plant protein sources of vitamin B12, Vitamin D3, vitamin K, creatine, or DHA. In fact, the only source of K2 from plants is from fermented vegetables, such as natto, while it’s widely found in animal foods and highest in liver and dairy products. (18) Moreover, taurine is a sulfur compound that’s only found in animal-based foods. (19)

While protein has many important functions, one of the best known and popular is its requirement for and ability to build muscle. A systematic review and meta-analysis found that animal protein tends to have a more favourable effect on lean mass compared to plant protein, and the benefit appears more pronounced in younger adults. (20) While it is possible to consume exclusively plant proteins and experience similar muscle-building results, on a gram per gram basis, animal proteins are general more anabolic. This anabolic advantage is due to higher concentrations of essential amino acids, particularly leucine, and also due to constituents such as taurine, carnosine, creatine, collagen and even cholesterol, none of which are present in plant foods. (21) The lower anabolic effect in plant proteins is partly due to their lower digestibility and lower amino acid content than animal protein sources.