Rice is a staple food and a versatile ingredient that is found in almost every household pantry and yet there remains a debate as to whether or not rice is good for you. Although we’ve been told that whole grains are always the best choice, cultures from around the world have consumed white rice for centuries, so, how bad can it really be? Here is everything that you need to know in the debate on brown rice vs. white rice. 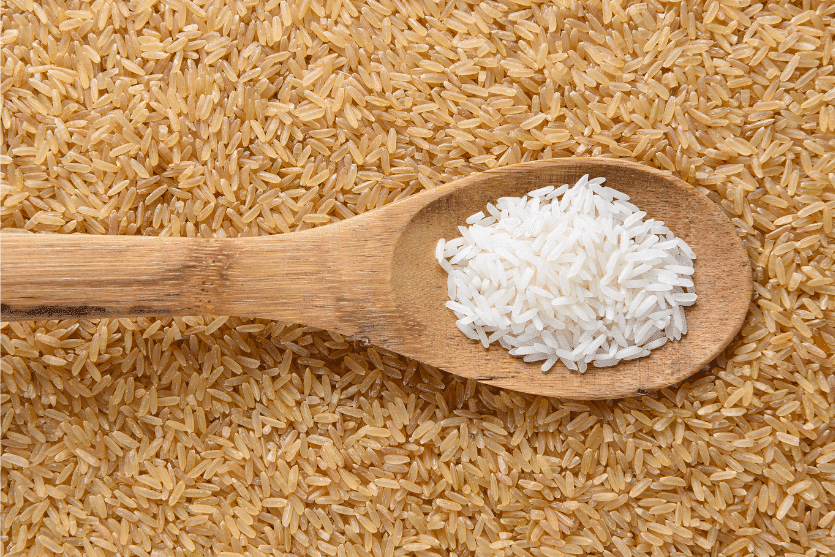 The Difference Between Brown and White Rice

All whole grains, including rice, contain three integral parts; the bran, the germ, and the endosperm. The bran is the outer skin of the edible kernel and antioxidants, B vitamins, and ﬁber; the germ contains B vitamins, some protein, and minerals, and stimulates growth; and the endosperm contains mostly starchy carbohydrates, proteins, and small amounts of vitamins and minerals. Brown rice is the whole grain version of rice, meaning that it contains the bran, germ, and endosperm, while white rice only contains the endosperm, as the bran and germ have been removed.

Given that brown rice contains the nutrient-dense bran and germ, brown rice may seem like the superior choice, but it’s actually not that simple. In fact, from a nutritional perspective, there are benefits to both forms of rice, so let’s take a look at brown rice vs. white rice per 100-gram cooked portion (1)(2).

Other Factors to Consider

While brown rice does contain greater amounts of vitamins and minerals, the presence of the bran and germ on the whole grain can also pose some issues. Because the bran is a protective layer for the grain, brown rice contains plant compounds called phytates, also known as antinutrients, which are present to help protect the grain until it is time to germinate. Unfortunately, these antinutrients, such as phytic acid, can reduce our body’s ability to digest and absorb many of the minerals present in brown rice (4). These phytates can actually bind to minerals such as zinc, magnesium, and calcium, and prevent them from being absorbed by the body.

Finally, since brown rice does contain higher levels of fiber and protein, it is often touted as the better choice given its glycemic index (GI) score, however, evidence shows that is not necessarily the case. The GI score of a food is known to represent the impact it can have on blood sugar levels; the higher the score the greater the impact on blood sugar. Although brown rice has a GI score of 50 and white rice has a GI score of 72, some research has shown that the difference is minimal and it is grain products (more so than brown or white rice) that have a greater impact on blood sugar, as different foods can impact different people differently (5)(6).

So, brown rice vs. white rice: which one is healthier?