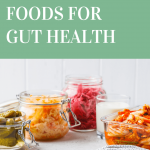 You might be surprised to learn that there is a war of bacteria going on inside your body, specifically your gut, and it’s important that you do what you can to help the good guys win. These oh-so-important beneficial bacteria have been shown to benefit overall health, as well as digestive health, mental health, and immune health, and help to manage weight. Fortunately, probiotics can be found in many common grocery store foods, you simply need to know what to look for. From yogurt to sauerkraut to kombucha, here is a list of healthy probiotic foods that you can add to your diet today. 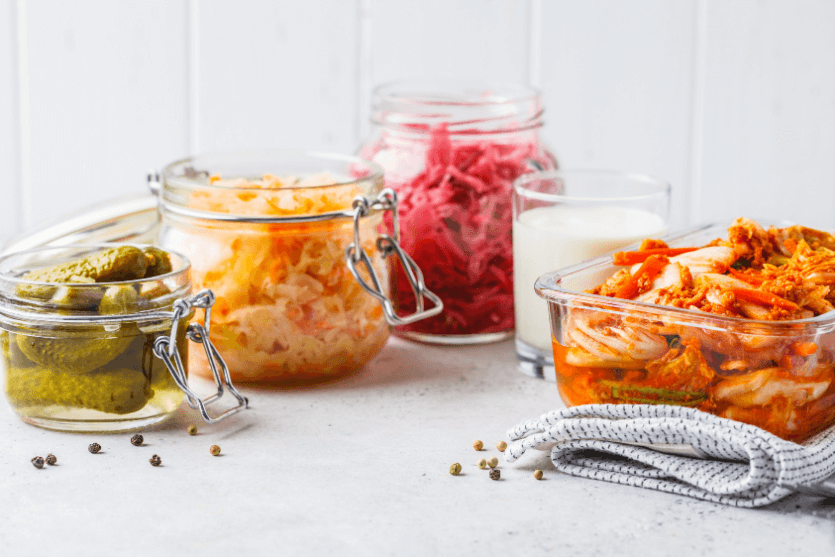 Probiotics are living microorganisms, including bacteria and yeast, that are found within the body’s gut microbiome that is beneficial for health. The word probiotic is the compound of two words; pro meaning “in favor of”, and biotic meaning “life”, defining probiotics as life-promoting. Generally speaking, there are two types of bacteria; good bacteria and bad bacteria, and probiotics are a form of good bacteria that help to support digestion, immune health, and overall health. (1)(2)

Historically, probiotics have been a part of traditional diets, generally consumed from fresh foods from good soil and by fermenting foods to keep them from spoiling. While this is less common today in the standard North American diet, probiotics can still be found in many common foods on grocery store shelves.

What are Probiotic Foods?

Probiotics are naturally found in fermented foods. Fermentation is the chemical process of breaking down sugars in foods (by bacteria and yeast) to preserve them for longer periods of time. This natural process of fermentation produces probiotic bacteria, however, it is important to note that not all fermented foods contain probiotics. The reason for this is that fermentation can take place via different processes and produce different outcomes – only the right component will produce probiotics and probiotic foods. For example, the fermentation process used to make beer uses yeast (which is not bacteria) and the acid in beer essentially counterbalances the effects of the fermentation, not to mention the sugar and alcohol.

Fortunately, finding fermented and probiotic foods is much easier than you may think. In fact, many traditionally fermented foods continue to line our grocery store shelves today.

Here is a list of probiotic foods that are good for you and easy to find.

Yogurt is one of the most common and popular probiotic foods. Commercial yogurt is made by adding two strains of bacteria, Streptococcus thermophilus, and Lactobacillus bulgaricus to milk, which helps to thicken the milk via the lactic acid that’s produced by the bacteria, however, although these are forms of bacteria, they do not have the same health benefits of live probiotics. Unfortunately, not all yogurt in the grocery store is traditionally fermented. Therefore, when shopping for yogurt, be sure to read the label and choose yogurt with ‘live active cultures‘ or ‘live bacterial cultures‘ as ingredients in order to ensure you are getting a true probiotic-rich food.

Similar to yogurt, kefir is a fermented milk drink similar that is made from kefir grains, a specific type of mesophilic symbiotic culture. Kefir is tangy, thick, and creamy, like drinkable, pourable yogurt, and can be made from cow’s or goat’s milk. A large number of microorganisms present in kefir and their microbial interactions help to make it a diverse and natural source of probiotics. (3)

Made from finely shredded cabbage, sauerkraut is made by a process called lacto-fermentation. When unpasteurized, sauerkraut is rich in Lactobacillus bacteria, as well as fiber, vitamins C, B, and K. (4) An essential part of German cuisine, sauerkraut is often used as a side dish or to top on meat or sausages. In order to ensure probiotic benefits, ensure that you choose unpasteurized sauerkraut, as pasteurization kills the live and active bacteria.

Similar to tofu, tempeh is a fermented soybean product. Once fermented, the soybeans create a firm and dense patty with a nutty and earthy paste known as tempeh. Not only does this fermentation process create a probiotic-rich food but it lowers the amount of phytic acid present in the soybeans, which has the potential to decrease the absorption of minerals in the soybeans. (5) Tempeh is also a good source of vegetarian protein making it a great substitute for meat in plant-based meals.

Kimchi is a staple in Korean cuisine and is made with salted, fermented cabbage mixed with seasonings including, but not limited to, radishes, gochugaru, spring onions, garlic, ginger, and jeotga. In fact, there are hundreds of different varieties of kimchi, all of which are typically fermented for a few days to a few weeks before serving. The process of lacto-fermentation uses Lactobacillus to break sugars down into lactic acid, giving kimchi its sour taste.

Pickles are one of the top probiotic foods, however, not all pickles are fermented. In order to get the benefits of probiotic bacteria, it is important to opt for naturally fermented pickles, where vinegar wasn’t used in the pickling process, instead, a salt and water solution was used to feed the growth of beneficial bacteria. Shelf-stable products are the first sign that the pickles were simply pickled and not fermented, as the pasteurization process to help keep them shelf-stable would denature any form of probiotic bacteria.

Traditional buttermilk is the fermented liquid that is leftover from churning butter and is considered a source of probiotics. Traditional buttermilk has a tart and tangy taste, similar to a yogurt-based drink, that contains live cultures of lactic acid bacteria. Unfortunately, the buttermilk commonly found in American supermarkets, known as cultured buttermilk, generally does not have any probiotic benefits.

Miso is a fermented, probiotic-rich food traditional to Japanese cuisine made from fermented soybeans with salt and a fungus called koji. Miso is found in a paste format, well known for its use in miso soup, which contains live, active cultures of bacteria. Miso comes in a variety of colors, such as white, yellow, red, and brown, and can be used in stir-fries, as a spread, or as a marinade, in addition to being added to soups.

Kombucha is a fermented, and slightly effervescent, tea beverage that is made with black or green tea and a symbiotic culture of bacteria and yeast, known as a SCOBY. Although only recently popularized in North America, kombucha has been consumed culturally in parts of the world, namely Asia, for thousands of years. Although there is limited research, it appears kombucha has many of the same health benefits as tea and is also a good source of probiotic bacteria. (6) However, note that not store-bought kombucha is created equal. Kombucha should be raw, if you see one that has been processed, filtered, or pasteurized, it is not authentic.

Although many kinds of cheese are made via fermentation, not all fermented cheeses contain probiotics. Similar to yogurt, in order to be considered one of the probiotic foods, cheese must contain live and active cultures as an ingredient. Raw (unpasteurized) milk cheeses contain beneficial bacteria, as the natural bacteria from the environment and in the milk stay alive while the cheese ferments. Probiotic-rich cheeses include aged, traditional cheddars, Gouda, and Alpine cheeses such as Gruyère. (7)(8)

Much like tempeh and miso, natto is a fermented food made from soybeans. Although it may look funky, natto contains a probiotic bacterial strain called Bacillus subtilis. A staple in Japanese cuisine, natto is commonly mixed with rice and is a source of Vitamin K, soy protein, and dietary fiber. (9)

In addition to pickles and cabbage, many other fresh vegetables can be fermented to produce beneficial probiotic bacteria. The age-old process of naturally fermenting foods not only helps to provide a healthy dose of bacteria but helps to extend the food’s shelf life and nutritional value. Carrots, cauliflower, cucumbers, kohlrabi, peppers, radishes, snap beans, and turnips can all be fermented and served as snacks, side dishes, or paired with a delicious cheeseboard.

Adding a serving of probiotic foods to your diet on a daily or weekly basis is a great way to provide your gut with a healthy dose of beneficial bacteria to support your overall health. With so many different probiotic foods to choose from, there are plenty of different ways to add probiotics to your diet and different ways to consume these bacteria-rich foods. As always, read food labels carefully to ensure that you are selecting true fermented foods with live and active probiotic bacteria.