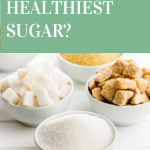 What Is The Healthiest Sugar?

Added sugar is one of the most discussed foods in the nutrition industry. Although too much sugar is certainly not good for your health, your body can handle a little bit of anything in a reasonable amount, even a little sugar. However, with so many types of sugar on the market things can certainly get confusing quickly. So, here is an answer to the great debate; what is the healthiest sugar? 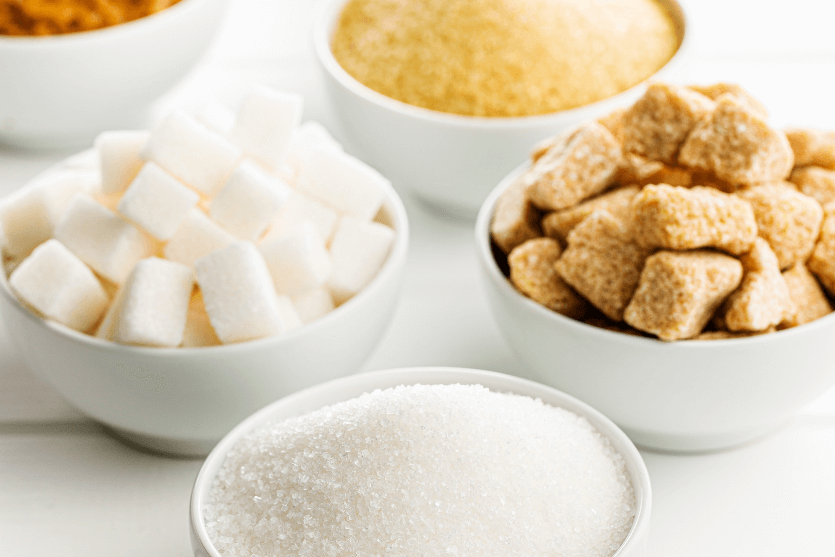 Although most people think of “sugar” as the white stuff we put in coffee or use for baking, sugar is actually a form of carbohydrate consisting of one or two basic carbohydrate units including glucose, fructose, galactose, sucrose, maltose, and lactose. Sugar occurs naturally in most foods, even in trace amounts, individually or in combinations. For instance, table sugar (or sucrose) is a combination of glucose and fructose, while lactose, found in dairy, is a combination of glucose and galactose.

In addition to different forms of sugar molecules, sugar can be found in natural and added forms. Sugars occur naturally in dairy, fruits, vegetables, grains, beans, lentils, nuts, and seeds, and are typically present along with fiber and starch. These natural sources of sugar are more complicated molecules, take longer to digest, and are more sustained sources of energy.

On the contrary, sugars that have been removed from their natural source to create isolated sugar are known as added sugars. These forms of sugar include white sugar, brown sugar, agave, honey, maple syrup, molasses, barley malt, fructose, glucose, glucose-fructose, maltose, sucrose, dextrose, fruit juice, and purée concentrates, just to name a few. Although it may seem confusing, added sugars can come from both natural and man-made sources.

Sugar vs. Sweeteners vs. Substitutes

Along with added and natural sugars, there are also many different forms of sweeteners and sugar substitutes. In addition to granulated sugars such as white sugar and brown sugar, sugar substitutes, such as stevia, alcohol sugars and artificial sweeteners have become increasingly popular, many of which are less ideal. However, for the purposes of determining the healthiest sugar, this review will focus specifically on added sugars that are commonly used in cooking and baking.

Brown sugar is refined white sugar with varying amounts of molasses added, which provides a darker color and a minor amount of trace nutrients. Both light and dark brown sugar contain molasses, dark brown sugar simply contains a higher concentration of it.

Raw sugar is cane sugar and is formed if the final refining process of white sugar production is bypassed.

Turbinado sugar, as well as demerara sugar, is a form of raw cane sugar and is traditionally slightly less processed than brown sugar. (3) Turbinado sugar is made from the first pressing of sugar cane and retains some natural molasses and has a finer, darker grain and light caramel color, while demerara sugar is made of large, pale golden crystals, and is slightly sticky to the touch. Nowadays, turbinado and demerara sugars are typically produced by adding molasses to white sugar, rather than the traditional methods.

Coconut sugar is made from the sap of coconut trees by a natural 2-step process; sap is collected from the flower buds of the coconut tree, the sap is then boiled to evaporate its water content, and the final product is coconut sugar. Chemically speaking, coconut sugar is very similar to white sugar, as 70% to 79% of coconut sugar is sucrose, and although it is often touted for being a good source of minerals the amount per one or two-teaspoon serving is minimal and its high sugar content outweighs any potential benefits.

Honey is the rich sugar-nectar collected by bees and is well known for its natural anti-bacterial and anti-microbial benefits thanks to its antioxidant properties. (4)(5) Honey has traditionally been used across cultures to help treat numerous health conditions, however, not all honey found in grocery stores today is created equal. Unfortunately, some brands of honey are highly processed, some of which are combined with high-fructose corn syrup, therefore, in order to get the health benefits of honey, be sure to look for raw or unpasteurized honey. (6)

Type of Sugar: Fructose, with some glucose and sucrose

Pure maple syrup is made by concentrating the sap from maple trees to produce a thick syrup. Unlike refined white sugar, maple syrup contains many trace minerals including manganese, zinc, and iron. (7) However, similar to honey, there are many fake maple syrups available on grocery stores shelves that do not provide the same health benefits, therefore, it imperative to look for pure maple syrup to ensure that you are getting the best option.

Type of Sugar: Sucrose, with some glucose and fructose

Often referred to as agave syrup, agave nectar is made from the agave plant, which is native to the Southern United States and Latin America. Traditionally, agave was known to have healing properties, however, the commercial agave sold today has very few beneficial nutritional properties. (8) The refining and processing of agave nectar sold in grocery stores today make it 1.5 times sweeter than regular table sugar and the end product is a highly refined, unhealthy syrup.

Type of Sugar: Fructose, with some sucrose

So, What is the Healthiest Sugar?

Despite the wide variety of sugars, they are actually very similar nutritionally. All forms of sugar are composed of glucose, fructose, and sucrose, which are the basic forms of sugar, and provide a similar number of calories (energy) per serving.

Sugars that have undergone less processing, such as cane sugar, turbinado sugar, and coconut sugar, tend to have a higher content of minerals and antioxidant compounds, albeit very limited.

Overall, although minimally processed natural sweeteners, such as raw cane sugar, raw honey, and pure maple syrup, are slightly less processed, and contain slightly more minerals and compounds, the nutritional overall differences are rather insignificant when it comes to metabolic health.

In short, if you are looking for the healthiest sugar, it is best to limit all forms of added sugar, as the nutritional differences between them are minimal. Although minimally processed sugars, such as cane sugar, raw honey, and pure maple syrup, contain slightly more micronutrients, the evidence to suggest they are truly superior is limited. Health Canada advises limiting the intake of added sugars to less than 10% of total daily calorie intake, ideally less than 5%, while American Heart Association advises capping added sugars at 6 teaspoons (25 grams) per day for women and 9 teaspoons (36 g) per day for men.