Protein is an important part of a healthy and well-balanced diet. Although whole grains are predominantly a source of carbohydrates and fiber, they do contain some protein and can help to increase your overall protein intake. Be it Kamut, quinoa, teff, farro, or wild rice, here is a list of the top high-protein grains you can add to your diet today. 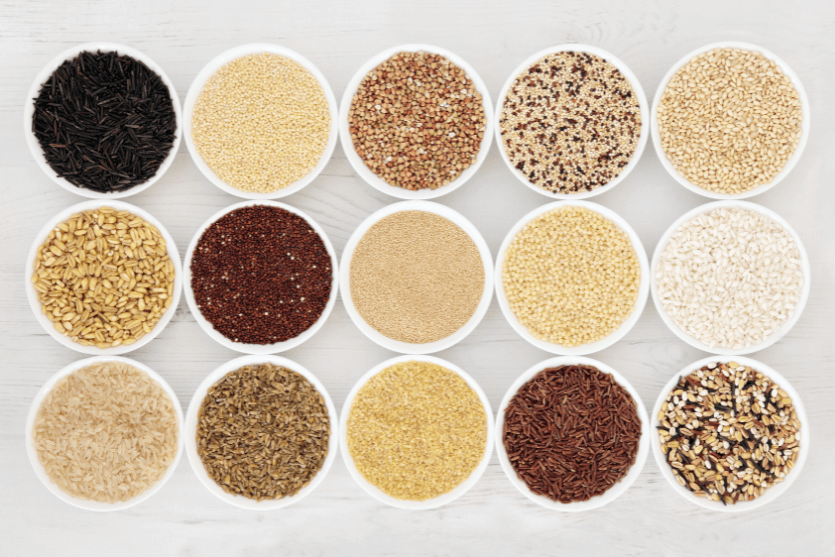 Protein is an essential macronutrient made up of amino acids that are required by the body and can be found in animal and plant foods. While most plants are predominantly sources of carbohydrates or fat, certain plants foods, including beans, lentils, and grains, contain slightly higher levels of protein per serving and can, therefore, serve as complementary sources of protein to animal proteins, or primary sources of protein for individuals following a vegetarian, vegan, or plant-based diet.

Traditionally known as Khorasan wheat, Kamut is an ancient variety of non-hybridized wheat that remains unchanged by breeding compared to its modern counterparts. This heirloom wheat grain is protected under the KAMUT® brand to never be altered through modern breeding programs and has been shown to have higher levels of protein and fatty acids than modern wheat and, in some cases, easier digestibility. (1)(2) Kamut has a firm texture and slightly sweet, rich, and nutty taste, which attracts interest from pasta makers and bread bakers alike. Kamut berries can be used in salads, soups, and stews, while Kamut flour works well in bread, pasta, and pancakes.

Teff is a tiny cereal grain, less than 1% the size of wheat kernels, grown in Ethiopia, Eritrea, and other countries where it’s an important element in the traditional diets of the Horn of Africa. (4) Teff is a naturally gluten-free grain and comes in a variety of colors including red, ivory, or dark brown. ‌While teff is traditionally and commonly used to make injera, a sour fermented flatbread, it can also be used to make porridge, stews, pilafs, or baked goods. Its mild, nutty, and slightly molasses-like flavor makes it an incredibly versatile grain.

Amaranth is a tiny ancient grain, although it is technically a pseudocereal as it’s a seed similar to buckwheat and quinoa, that resembles light-colored caviar. This gluten-free grain is a good source of fiber and vegetarian protein and has an earthy and nutty flavor. Amaranth is sold in both whole grain and flour formats and is a versatile ingredient that works well in a variety of dishes such as hot cereals, polenta, and pilafs.

Quinoa, pronounced keen-wah, is also pseudocereal and a member of the Chenopodium quinoa plant family. There are over 3,000 varieties of quinoa, although the most popular are red, black, and white. (7) Quinoa is considered a gluten-free grain that is rich in fiber and protein that can be consumed whole, rolled into flakes, or ground into flour. Whole-grain quinoa is quick to cook and ideal for pilafs, soups, and salads.

Farro is one of the most popular ancient grains and is a relative to wheat. Farro has been a staple in the Mediterranean diet, especially in Italy, for decades and in recent years has gained popularity in North America as being one of the most beloved high-protein grains among individuals following a plant-based diet. Although not gluten-free, farro is high in fiber, highly versatile, and relatively inexpensive with a nutty flavor and chewy texture. Similar in size to barley, farro is available in semi-pearled and pearled formats and is easily used in soups, risottos, and salads, while its flour is often used to make pasta.

Despite its name, wild rice is not rice at all but the seed of semi-aquatic grass that grows with abundance in North America’s Great Lakes region. Wild rice is one of four species of grass that produces edible seeds resembling rice, it’s merely referred to as rice because it looks and cooks like other types of rice. Due to its strong flavor and high price point, wild rice is often sold with and cooked with other grains or forms of rice. Its long black grains, firm texture, and nutty taste make it a great side dish or a wonderful addition to soups.

Millet is the name given to several small related grains found around the world including pearl millet, foxtail millet, proso millet, ﬁnger millet, and fonio. (11) While it looks like a seed, millet has a similar nutritional profile to other cereal grains with rich fiber, protein, and antioxidant content. (12) Millet can be found in white, grey, yellow or red, and is another versatile whole grain that works well in porridges and side dishes, while its flour can be made into flatbreads, such as Indian roti, or polenta instead of cornmeal.

Be it steel-cut, rolled, or quick-cooking, oats are a high-protein grain that is incredibly versatile and inherently gluten-free. Although steel-cut oats are commonly considered the healthier option, all forms of oats are healthy, a great source of fiber, and contain some protein. In addition to making a great bowl of oatmeal, oats also make wonderful homemade granola and oat flour makes a great addition to any baked good.

Similar in size to wheat kernels, buckwheat is a gluten-free pseudocereal and a cousin of rhubarb. Buckwheat is mainly harvested in the northern hemisphere and is a mainstay of traditional Eastern European cuisine. Buckwheat has a very mild nutty flavor and is commonly used in groat, the hearty hulled seed of the buckwheat plant, and flour formats. Whole groat buckwheat can be used like rice for salads and side dishes or similarly to oats in porridge, while its flour is commonly used in crepes, soba noodles, or quick bread.

Although corn is often considered a vegetable it is technically a grain.  Known as “maize” in most parts of the world, corn is a whole grain that is considered a part vegetable and part starch, while it’s actually a whole grain rich in fiber and small amounts of protein.  From fresh corn to popcorn to polenta to tortillas to cornbread, corn is one of the most versatile high-protein grains. In addition to its whole grain form, corn is also found in ground formats milled to create cornmeal, which has a gritty texture, and corn flour, which is more finely ground. Ground corn works well for pancakes, biscuits, or bread recipes.

Sorghum is a genus of about 25 species of flowering plants native to Australia with other species originating in Africa and Asia. (16) Sorghum, also known as milo, is a gluten-free grain with a hearty and chewy texture similar to wheat berries. Sorghum can be popped like popcorn, cooked into porridge, or ground into flour for baked foods.

Barley is one of the oldest cultivated grains and is grown in temperate climates globally. Although most well-known as being the primary grain for producing beer, barley is a hearty high-protein grain with numerous culinary uses. Hulled barley, also known as pearl barley, is one of the highest fiber-containing high-protein grains; 1/4-cup serving provides 32% of your daily value of fiber, and while barley is not wheat, it does contain gluten. Pear barley lends itself well to a number of dishes including soups, stews, risottos, pilafs, salads, and stuffings.

Ranking of High-Protein Grains per Serving

All nutrition data is based on FoodData Central.

While whole grains are predominantly sources of carbohydrates and fiber, certain whole grains, such as Kamut, teff, amaranth, quinoa, and farro, contain higher levels of protein compared to other plant foods. High-protein grains can be consumed in addition to animal protein sources or as sources of plant-based protein for individuals following vegetarian or vegan diets.